The journey to Namibia takes place in the vast majority of cases by flight to Windhoek. In the pre-Corona period, three airlines offered direct flights from Germany to Windhoek: Air Namibia, Condor and, since October 2019, Eurowings (all flights to and from Frankfurt). Air Namibia flew the route Windhoek – Frankfurt – Windhoek 6 times a week (December 1 – June 30) or even 7 times a week (July 1 – November 30). All flights started at 8:10 p.m. and the flight time is a little over 10 hours. Due to the corona pandemic, all regular domestic and international flights were suspended from mid-March to mid-September 2020. Only cargo flights and special ad hoc charter flights are operated occasionally.

The ‘Frankfurt Shuttle’ of Air Namibia with the flights SW285 (Windhoek – Frankfurt) and SW286 (Frankfurt – Windhoek) has so far formed the backbone of the flight connections to Germany, for tourists as well as for business travelers and Germans living in Namibia. Unfortunately, it is currently very unlikely that Air Namibia will resume this route ‘to Corona’. Despite the fact that the flights on this route are actually quite well utilized, Air Namibia has never managed to write black numbers with the SW285 / 286. The flight route has therefore been on the brink for a long time and has so far been maintained mainly because of its importance for Namibia tourism on the important German market.

According to indexdotcom, Air Namibia, which has always been chronically deficient, is making an even bigger minus than it was before Corona. It is more than questionable whether Air Namibia (which is practically insolvent) will still exist in its current form after Corona. And even if this is the case, it seems unlikely (as of September 2020) that Air Namibia will resume the deficit ‘Frankfurt Shuttle’. After all, at least some scheduled flights to Windhoek could be resumed in mid-September 2020 and since then Lufhansa has been flying to Windhoek (via its subsidiary Eurowings) three times a week. Other important carriers such as Ethiopian Airlines and Qatar Airways are likely to resume or have already started their scheduled flights.

Ticket prices: At normal times, flight prices vary depending on the airline, ticket tariff, booking period, length of stay and also depending on the exchange rate between around € 700 and around € 1,000 for a return flight ticket in economy class. Depending on the season (especially around Easter) and when booking at short notice, an economy ticket can cost up to € 1200 and more. This is rather the exception, the normal price is around € 800. As part of special promotions (often in October / November) you could occasionally get return flight tickets Whk-Ffm-Whk for less than € 600. The (normal) Business Class tariff is around € 2720 – 3160. The ticket prices of the commercial special charter flights, which offered practically the only way to leave the country during the Corona period (since March / April)

In addition to the flight connections from Air Namibia, Condor and Eurowings, there were also flights from the Dutch KLM from Windhoek to Amsterdam until April 2020 (each with a one and a half hour stopover in Luanda / Angola). However, this connection was also discontinued in March 2020 and it is not currently possible to predict whether KLM will resume the route in the foreseeable future.

Apart from these direct flights to Europe, you can of course (in normal times) also fly to Windhoek with other airlines, especially South African Airways (SAA) Qatar Airways) and Ethiopian Airlines, but with a change at Oliver Tambo International Airport Johannesburg or in Doha / Qatar or Addis Ababa / Ethiopia. However, by changing the travel time (depending on the connecting flight) usually extends by several hours. The tickets from SAA, Ethiopian Airlines and especially Qatar Airways were often cheaper than those for direct flights to Germany. You should allow at least one and a half hours to change trains in Johannesburg, as there you have to go through passport control as a transit passenger. All three airlines have offices in Windhoek.

The Hosea Kutako Airport is the international airport of Windhoek. It is about 40 km east of the city center, the transfer time is about 45 minutes. The transfer costs from the airport to the city or vice versa with one of the minibus companies specializing in airport transfers vary. Depending on the number of passengers, the cost is usually around N $ 200-300 (€ 15 – € 20) per person. The transfers can be booked online in advance. Attention: Normal taxis are not allowed to drive onto the airport premises, but only to the entrance gate!

Tip: If you are only away from Windhoek for a short time, there is also the option of parking your own car under a roof, well guarded and reasonably priced at the long-term parking lot at Hosea-Kutako Airport as a comfortable alternative to airport transfers.

Eros Domestic Airport, which is mainly used for domestic and charter flights as well as for small private planes, is located on the southern outskirts of Windhoek. From here, for example, domestic flights to Walvis Bay, Oranjemund and Ondangwa start. 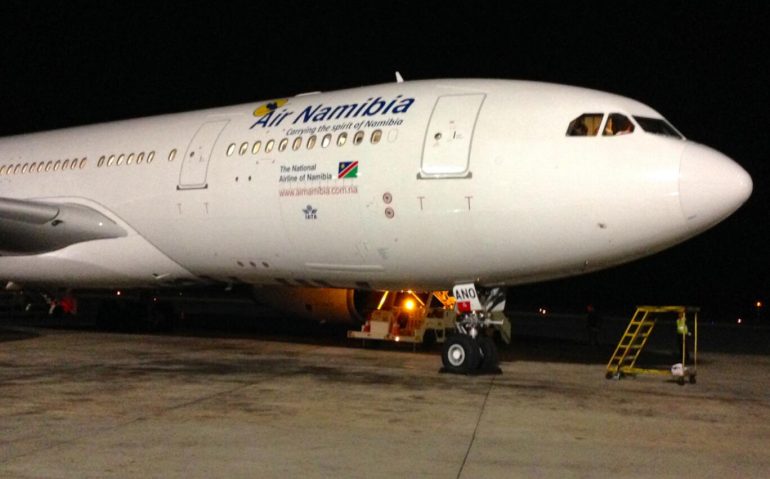