Bangkok’s large size and bustle, combined with the constant heat and large number of visitors, make it an awkward place to visit, where you have to spend many days or even weeks before you can catch up on your way of life in any way. The heat, the bustle and the cultural differences get used to the surface quite quickly, and especially the heat and the polluted bustle of the streets is easy to escape to the large air-conditioned shopping malls where it is nice to learn the local culture.

Bangkok has a huge number of different districts, but only a few of them are essential for the traveler. It’s hard to decide where in the city to spend your night, but you should choose your accommodation carefully from the area that interests you the most or has the best connections to other parts. Of the neighborhoods, Banglamphu, whose main street Khao San Road is Bangkok’s most famous street, the adjacent “old town” of Ko Ratanakos, the Chinese district, and a few other areas that include blocks filled with Pratunam shopping malls attract the most tourists. 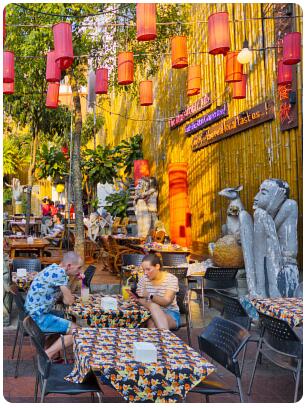 In Bangkok, it is better to focus on a few districts rather than get around it like crazy, and a sensible tourist will especially take advantage of boats moving on canals and rivers, subways and BTS trains, all of which are not only cool but also quick to explore the city.

Bangkok is worth traveling from November to April and is a great travel destination for solitary adventurers, couples and small groups of any age. As a large city, Bangkok is a fairly safe place, but it is also an exotic tropical metropolis where your eyes should be kept open at all times.

Bangkok originated as an actual city in the late 18th century, when it became the capital of what was then Siam. Before that, it was only a small trading post, but by the early 19th century it was the absolute center of the whole country. The city has grown strongly throughout its history, but especially its population rose from the 1960s to the 1990s. Indeed, many major construction projects date back to this period, such as the city-wide highways at various levels. In the 1990s, the city became an international financial center, although it has since experienced a couple of economic collapses (1998 and 2008).

Bangkok has a tropical climate with two main seasons but with virtually three different types of weather.

The best time to visit Bangkok is from late November to late April. Of this period, the beginning of December is the coolest in early February, and during this season the daytime temperature is 28 to 32 degrees and at night it is 16 to 25 degrees. Towards the end of February, temperatures rise, and in March and April, daytime temperatures of 34 to 36 degrees are normal and not much below 30 degrees, even at night.

From the end of April onwards, temperatures will remain at 33-34 degrees and at night it will be 25-27 degrees. The biggest difference from the beginning of the year is that from May onwards it will rain enormously, with the wettest months being (respectively) September, October and May. Also in the other summer months it rains so much that the air humidity is high and it is not nice to tour the city on rainy days.

The monsoon season lasts until November, but compared to the summer months, November is already a low rainfall month. It rains very little in Christmas, January, February and March, and they are the best months to be in Bangkok.

The best times to travel to Bangkok are during the winter months and specifically during the weeks when there are no public holidays.

From the first half of November until Christmas, there are quite a few Western tourists in Bangkok, but their numbers will multiply during the Christmas holidays and the number will remain high until mid-January. The new peak is at the end of February, when Europeans are on holiday, and even then it is busier than normal.

March is also a good month to spend time in Bangkok, and also the first three weeks of April are nice albeit hot weeks in Bangkok.