North Korean participation in the Winter Olympics in South Korea is historic. The last time South Korea hosted the 1988 Olympic Games in Seoul, North Korea boycotted the Games and bombed a 115-passenger South Korean passenger plane. Now the neighbors have a common team, and the Pyeongchang Games can be a milestone for the Olympic ambitions as a peace builder.

Six weeks before the Olympic flame was to be lit in Pyeongchang, North Korean leader Kim Jong-un in his New Year’s speech opened up for dialogue with South Korea and for participation in the Winter Olympics. The handshake to South Korea came after massive international pressure due to missile tests and test explosions of nuclear weapons. The New Year’s speech helped the two countries start negotiations on North Korean participation in the Winter Games and in mid-January it became clear that North Korea would not only participate in the Olympics, but that the two countries would march together in the opening ceremony and pose with a joint team and ice hockey. This is the first time the two countries, which are technically still at war, participate in the same team in the Olympics.

The Olympics are far more than just sports, and on several occasions the International Olympic Committee (IOC) has been subjected to political boycotts . The 1976 Montreal Olympics were boycotted by 24 African nations because of the IOC’s apartheid policy. In 1980 in Moscow, 65 nations chose not to attend the Soviet Union’s invasion of Afghanistan the year before, and in 1984, when the Olympics were held in Los Angeles, 14 states decided to retaliate against the 1980 boycott.

When Pierre de Coubertin established the IOC in 1894, the idea was that the Olympics would contribute to reconciliation between warring nations. This idea has proved difficult to satisfy and there are many examples of the Olympics dividing nations. After the last two world wars, the losing nations have been banned from the subsequent Olympic Games as punishment for misdeeds during these wars.

Most participating nations sign an Olympic ceasefire at the UN General Assembly ahead of the Games (a scheme introduced ahead of the 1994 Lillehammer Olympics), but it is not always worth the paper it is written on. Russia attacked Georgia at the same time as the opening ceremony of the Beijing Olympics in 2008 and occupied the Crimean peninsula during the Paralympics in Sochi in 2014, to name two examples from modern times.

But with the reconciliation process in this year’s Games, the IOC sees its average to highlight what they believe is the power of the Olympic spirit after several years of strong negative focus.

The IOC has long wanted to get North and South Korea to compete on the same team, and several times they have been close to success. A few years after the Korean War, in connection with the Summer Olympics in Tokyo in 1964, this became a topical issue. The reasoning was simple: it is only allowed to have one Olympic Committee in each country, and the IOC considered the two neighboring countries as one nation. They used the same logic against East and West Germany, which in the period 1956-1964 had to participate together in the Olympics. But the first genuine attempt to get North and South Korea to compete came in connection with the Seoul Olympics in 1988. When Seoul was awarded the Summer Olympics at the IOC Congress in 1981, the committee made two strategic moves: negotiations with North Korea to arrange some of the exercises and at the same time the IOC itself started sending out Olympic invitations, something the host nations had previously been responsible for. The negotiations were in reality a procrastination tactic on the part of the IOC and the aim was to negotiate as long as possible in order to minimize the political protests. It ended with North Korea boycotting the Olympics in Seoul along with four other countries. The strategy was nevertheless perceived as a success.

The basis for these negotiations came in handy when South Korean President Kim Dae-jung started his “Sunshine Policy” in the 1990s, a policy that brought him the Nobel Peace Prize . The “sunshine policy” contributed, among other things, to the two Korean neighbors joining forces at the opening ceremonies during the Sydney Olympics in 2000, the Olympics in Athens in 2004 and the Olympics in Turin in 2006.

Ahead of the Olympics in Beijing in 2008, there were also serious negotiations about South and North Korea to participate in the same team, but they do not succeed. It is said that it was formalities: The two countries did not agree on how to pick out the practitioners. North Korea would base its withdrawals on population, while South Korea would base its withdrawals on performance.

For the Olympics in Pyeongchang, they have reached an intermediate solution where the IOC and both nations have been pragmatic. They have agreed that North Korea, a country located in Asia according to AGOODDIR, will participate with 22 athletes in five disciplines: ice hockey, figure skating, short track skating, cross-country skiing and alpine skiing.

The athletes are followed by 24 coaches and 21 representatives from the North Korean media. During the opening ceremony, the north and south will march in under a common flag and as a united Korea. In the event of a victory in one of the five disciplines, Arirang is played, which is a more than 2000-year-old Korean song and is considered to be the unofficial united Korean national anthem.

4: Not just a popular experiment

In the sports field, there has so far been the most controversy over the composition of the women’s ice hockey team. The team will consist of twelve players from North Korea and 23 from South Korea. Only 22 players are allowed to participate in each match and at least three of these must be North Korean.

Some have criticized the IOC for this measure being contrary to the committee’s gender equality policy because the men’s ice hockey team is not covered by the same agreement. Canadian-American coach Sarah Murray has said that a merged team is a mockery of the South Korean players who have been preparing for the tournament at home for many years, and it attracted a lot of attention when the South Korean prime minister claimed that it was okay to experiment with the women’s hockey team because they did not have a chance to win anyway. Six out of ten South Koreans are against neighboring countries playing on the same team.

There has not been as much debate about the other athletes from the north. Of the North Koreans who will participate, Ryom Tae-ok and Kim Ju-sik are the only ones who are qualified. They took bronze in the Asian Winter Games last year, but were not registered for the Olympics within the deadline and are therefore given a quota place by the IOC to be able to participate. The rest of the North Korean participants will also receive quota space. Jong Kwang-bom and Choe Un-song will compete in the men’s 500 and 1500 short track races, Han Chun-gyong, Pak Il-chol and Kim Ryon-hyang will participate in cross-country skiing and Choe Myong-gwang and Kang Song-il will participate in the men’s downhill and giant slalom. Kim Ryon-hyang will participate in the ladies’ slalom and giant slalom.

The IOC has not told anyone about which doping regime the North Korean practitioners have been covered by in the past year. 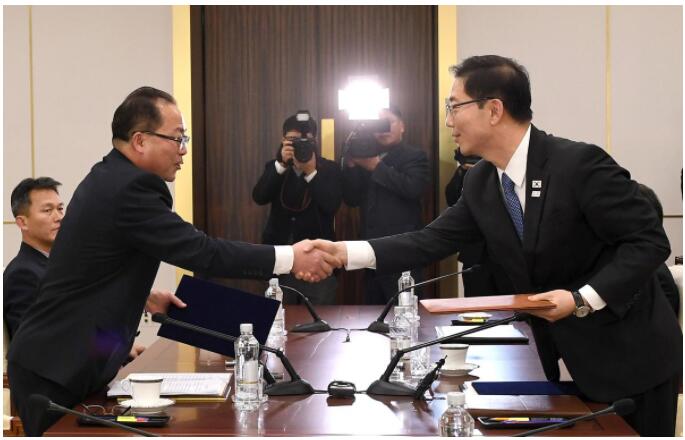