Make a rune trip in Colombia and start in the Colombian capital Bogotá. From here you go to Villa de Leyva, a city founded during the colonial era. It almost feels like traveling back in time because Villa de Leyva looks much like it did 500 years ago, when the Spaniards took power in Colombia. On to Zona Cafetera (the coffee zone) where you get an exciting insight into the country’s coffee production and can also walk in the beautiful Cocora Valley.

The next stop is Colombia’s second largest city, Medellín. The city has a gloomy past as the world’s cocaine capital under Pablo Escobar’s rule in the 1980s and early 1990s. However, the city has since undergone a fantastic transformation and is today an innovative, attractive and safe metropolis. A guided city tour that gives you an insight into the enormous transformation that the city has undergone over the past 30 years is included in the stay.

From Medellín you then fly to Cartagena on the Caribbean coast. The beautiful old city from the colonial era is Colombia’s main attractions and not without reason. The city was added to the UNESCO World Heritage List in 1984 for its beautiful and well-preserved colonial buildings and not least the city’s 13 km long city walls and fort. The guide gives you a unique insight into the city’s history. After a few days in Cartagena, the tour continues to Santa Marta, which is also located on the Caribbean coast. Here you visit the cozy mountain village of Minca, go on a hiking trip in Tayrona National Park and enjoy the relaxed atmosphere and the beautiful beach at Palomino. See discount hotels in Colombia on ehotelat.

Day 1: Departure from Scandinavia and arrival in Bogotá

You leave Scandinavia and arrive in Bogotá the same day (local time). At the airport you will be picked up and driven to the hotel located in the old town of Candelaria. You spend the rest of the day on your own. If you are not too tired after the flight, you can take a walk on the pleasant streets and see the beautiful and colorful historic buildings and churches and eat at one of the small restaurants.

On this day, the journey goes towards the beautiful old town of Villa de Leyva, which was founded during the colonial era. An English-speaking local guide accompanies you throughout the day. On the way you stop at the Paloquemao market where both ordinary Colombians and local chefs make their purchases of ingredients for their own consumption and for use in local restaurants. Here you will find everything from food to office supplies. Then you drive on to Zipaquirá which is approx. 50 km north of Bogota. This city is known for its salt mines and in one of the mines you will find one of Colombia’s main attractions, 190 meters underground: the Salt Cathedral. It is a breathtakingly beautiful sight. The cathedral is lit by a giant cross that could be the largest of its kind underground. When you arrive at Villa de Leyva you have time to explore the beautiful city on your own. You can visit the Plaza Mayor, the town square, go exploring on the city’s cobbled streets and enjoy beautiful churches, houses and small shops. (F )

Enjoy your morning at Villa de Leyva before driving to Bogota Airport to fly to Armenia, located in Zona Cafetera, Colombia’s popular coffee district. Here you will live in beautiful surroundings on a traditional hacienda (farm) for the next two days. ( F )

Colombia has a perfect climate for growing coffee beans and the country is therefore the world’s third largest coffee exporter. On this day, it’s time to go to a coffee plantation and see Colombia’s coffee production up close. You will learn exciting knowledge about everything from planting and harvesting to washing and drying coffee beans. Then, of course, it’s time to taste the best coffee in the world – the Colombian. ( F , L )

Day 5: Cocora Valley and Salento on your own

The day begins with a beautiful hiking trip in the Cocora Valley which is located nearby. The nature in the Cocora Valley is very beautiful. The green valley is surrounded by hills, which gives the hike a kind of adventurous feeling. You can also see Colombia’s national tree, the wax palm (Palma de cera), here. It is the world’s tallest palm tree that can grow up to 70 meters high. In the afternoon you can discover the cozy city of Salento on your own. It is only a 10-15 minute walk from the guesthouse where you live. ( F , L )

Get on the bus and enjoy the beautiful views on this trip to Colombia’s second largest city, Medellín. The trip takes approx. eight hours. Medellín has been nicknamed “City of Eternal Spring” or “the city of eternal spring” due to the pleasant climate all year round. It is the city of Colombia that has undergone the greatest transformation in the last 25 years. From being one of the most dangerous cities in the world under Pablo Escobar, who made Medellín the world’s cocaine capital in the 1980s and 1990s to becoming one of the safest cities in Colombia today. ( F )

On this day you can take part in a guided city tour in Medellín where you will hear more about the city’s history and transformation from being one of the places with the highest crime in the world to becoming a lively and attractive metropolis. In the afternoon you can explore more of the city on your own.

Day 8: From Medellín to Cartagena

After breakfast you will be driven to the airport and after a short flight you will arrive in Cartagena on Colombia’s Caribbean coast. The city was founded in 1533 and is named after Cartagena in Spain. Cartagena played an important role both politically and economically during the colonial era when the Spaniards expanded their empire in Colombia. To protect the city from pirates, a large fort and a 13 km long city wall were built, which in 1984 became a UNESCO World Heritage Site. There is something magical about Cartagena, something you can experience as you walk along the cobbled streets of the older neighborhoods and see the beautiful, colorful and well-preserved colonial-era buildings and churches.

On this day you go on a guided city tour of Cartagena. You get an exciting insight into the city’s history in the old quarters and then the guide takes you out of the city to the La Popa hills, where a beautiful monastery and La Candelaria Church are located. From here you have a fantastic view of Cartagena.

Day 10: On your own in Cartagena

During the day you can explore Cartagena on your own. You can choose to stroll around the beautiful old town or go on an excursion. About 40 km from Cartagena are the island collections Rosario and San Bernardo, which consist of a total of 27 islands. Here you will find characteristic white, Caribbean sandy beaches with azure waters and swaying palm trees and many places that are perfect for snorkeling. You can also go to the volcano El Totumo, where you can take a mud bath in the naturally warm mud from the volcano. It is said that clay has a healing effect. After the mud bath, you can rinse yourself clean in the nearby lagoon.

You say goodbye to Cartagena and continue on to Santa Marta, which is also located on the Caribbean coast and which was the Spaniards’ first settlement when they came to Colombia. The trip to Santa Marta takes about five hours and when you arrive you can spend the rest of the day doing whatever you want.

Enjoy the morning in Santa Marta on your own. In the afternoon, the tour goes from Santa Marta’s tropical climate to the mountains and the small charming town of Minca. Along the way you have time to see more waterfalls, hike a short distance and visit a small coffee farm. ( F , L )

In the morning you meet the guide and go on a discovery trip outside Minca in a four-wheel drive car. During the day you visit the organic coffee farm La Victoria. There you will get an overview of the farm’s history, which dates back to 1892. After a tour of 2-3 hours, it’s time for a short walk to the Pozo Azul waterfall, where you can take a refreshing dip. On the way back to Minca you stop at a small restaurant known for its good chorizos and grilled fish. ( F )

Tayrona National Park is one of Colombia’s most visited national parks. And no wonder! The park offers beautiful and varied nature with lush rainforests and beautiful beaches. The guide takes you on a walk in the park and learns a lot about the park’s exciting flora and fauna. From Tayrona you then drive to the cozy coastal town of Palomino. ( F )

You can enjoy the beach and the cozy atmosphere of the coastal town of Palomino all day. ( F )

On this day, it’s time to say goodbye to Colombia. You will be picked up at the guesthouse where you live and driven to the airport. You fly via Bogota to Scandinavia. ( F )

When you return to Scandinavia, it depends on which airline you fly with.

Fifteen nights at the guesthouse 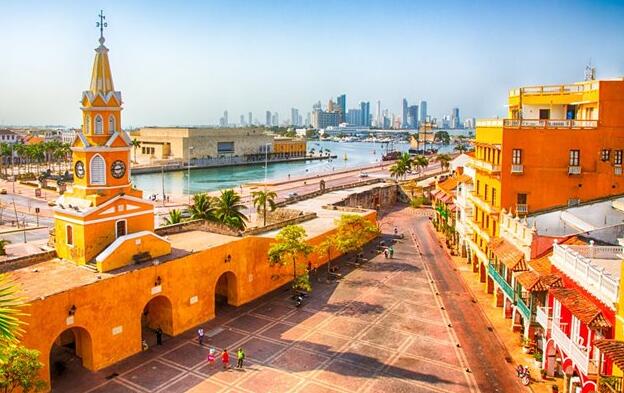