You should choose your house or apartment very carefully and also take security aspects into account (see also the section on ‘Security situation’). If you live in Windhoek as an expatriate and can afford the rents, which are quite high by African standards, you will usually concentrate primarily on the eastern and southern districts of Windhoek when looking for a house. The best (but also most expensive) residential areas are Klein-Windhoek (including the so-called ‘Luxury Hill’) and Ludwigsdorf. Eros, Olympia, Avis and Auasblick are a bit cheaper. This is followed by Pioneers Park, Hochland Park, Kleine Kuppe and, in the southeast of the city, the Academia district, which is near the University of Namibia.

The two main living options are on the one hand normal detached houses and on the other hand so-called ‘townhouses’. Detached houses often appear a bit oversized by European standards. 250-350 square meters of living space on partly very large plots are not only too large, especially for one- and two-person households, but also require considerable maintenance costs (guarding, gardening, water costs for garden irrigation, etc.). In addition, it is quite expensive to keep these large houses, which are usually poorly insulated, warm in winter and to keep them warm.

The alternative to a detached house is a so-called ‘townhouse’. These are around 80-140 square meters of residential units on relatively small plots, similar to German row houses. 10 to 30, but occasionally up to 100 such residential units form a townhouse complex, which is usually surrounded by a wall that forms the common security perimeter. Most of these townhouse complexes (called ‘gated communities’ in South Africa) can be found in the newer districts such as Ludwigsdorf or Pioneers Park, while older districts such as Klein-Windhoek and Eros mainly consist of detached single houses. Because of the smaller living space, but above all because of the considerably smaller gardens, townhouses are cheaper to rent and less expensive to maintain. They require less maintenance and also have advantages in terms of security, especially when you are away for a longer period of time. Of such townhouses are often touted as ‘perfect lock & go townhouses’ to real estate agents. 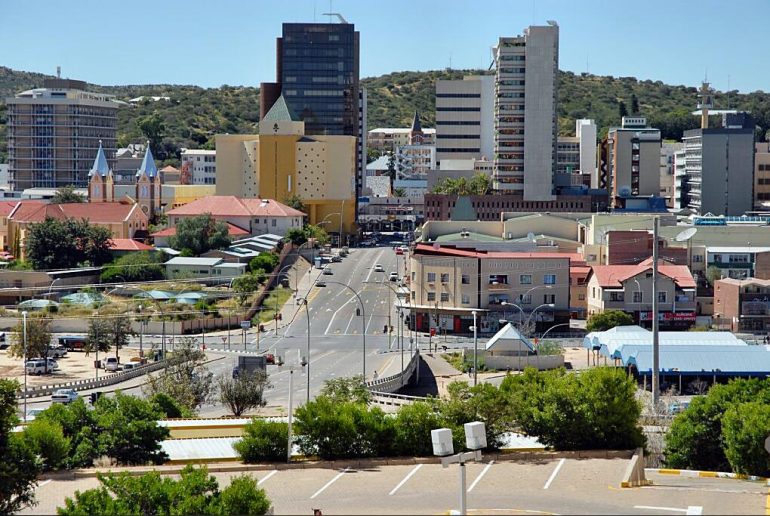 Due to the shortage of living space, rents are relatively high in relation to the other cost of living, especially in Windhoek and Swakopmund. For a house or townhouse that corresponds roughly to European expectations, one has to reckon with monthly rents between approx. N $ 15,000 – 25,000, depending on the approx Location, size and equipment (as of September 2018). In other Namibian cities, rents are a bit cheaper.

Finding a suitable and affordable rental property at short notice is not always easy, especially in Windhoek. Since 2017, however, rents seem to have stagnated and even decreased a little here and there. There are several reasons for this. On the one hand, there are a number of new and sometimes very large residential complexes on the outskirts or even a little outside of Windhoek, such as Elisenheim, north of Windhoek and Finkenstein, on the road to the airport, approx. 15 km outside Windhoek. The relatively low house prices in Elisenheim by Windhoek standards put pressure on the prices of houses in the city center. Due to the economic crisis in Angola, the demand from well-heeled Angolans for houses in the upscale segment has also fallen sharply. Sometimes they even act as salespeople.

In Namibia, one or more real estate agents are usually employed to look for an apartment or house. It should be noted that a landlord – in contrast to Germany – often gives the property to be rented to several brokers at the same time. The same property may therefore be offered by several brokers. The realtors often show you houses and apartments that do not correspond in any way to the information you have given them beforehand. You should therefore give the brokers the most detailed possible specifications for the search and let them know in advance which properties you have already looked at. In Namibia, the agency commission is usually paid by the landlord, not the tenant. However, the landlord will probably allocate or add the brokerage fees to the rental price beforehand.

According to directoryaah, the middle-income residents of Windhoek live mainly in the western part of Windhoek, but also partly in the south of the city (eg Kleine Kuppe). Katutura, Wanaheda and Khomasdal are the former townships of Windhoek. They are about five to seven kilometers north and northwest of the city center. The majority of the Windhoekers with low incomes live here in simple and much smaller houses. A highly acclaimed Namibian film was recently made about life in Katutura.

Informal settlements (‘Informal Settlements’, squatter settlements made up of simple huts) connect to the former townships to the north and west.

In summary, it can be said that Windhoek – but this also applies to other cities in Namibia – still clearly reflects the consequences of apartheid, also and especially in its settlement structure and the spatial distribution of the population. The better-earning residents of Windhoek – these are no longer exclusively (but still predominantly) white Namibians and expatriates – live in the east and south of the city, the middle class in the west and south and the population with very little or no regular income live on the outskirts to the north, northwest and extreme west of the city.