Unfortunately, Namibia’s agriculture offers only limited development opportunities. On the whole, Namibia’s agricultural potential (mainly extensive livestock farming), which is only quite small anyway, appears to be largely exhausted, at least in the ‘Commercial Areas’. With only about 47,000 hectares, the potentially irrigable agricultural area is only small, even if the necessary water could be made available. In 2010, the actually irrigated area in Namibia was just 9,000 ha (90 square kilometers), i.e. only about 0.01% of the total area of the country. The recently completed construction of the Neckartaldamm near Keetmanshoop In the south of the country, the irrigation area should increase by a further 5,000 hectares in the medium term, but that’s about it! Otherwise there is certainly still some intensification potential for cattle breeding in the communal areas in the north (and to a lesser extent in the ‘commercial areas’), but that means that the potential of Namibian agriculture is largely exhausted.

An expansion of mining (especially uranium mining) could lead to a temporary economic boom in the Erongo region in the future, provided the world market price for uranium rises again and the currently suspended plans for further mines are actually implemented at some point. However, this boom would end again after 20-30 years at the latest, with all the resulting economic and environmental problems for the Erongo region. Uranium mining therefore offers only a very limited potential for economic development, but no real long-term perspective.

Oil and gas production: Significant gas deposits were proven years ago off the coast of southern Namibia (Kudu gas field). However, this gas deposit has not yet been tapped, mainly due to mining difficulties. Financing such a large-scale project also appears to be difficult. For years there has been repeated discussion about how the development of the deposit could be financed and how the gas that is then extracted should best be used. The currently favored option seems to be the generation of electricity from the gas deposits in a gas-fired power plant near Oranjemund that has yet to be built. But this proposal is apparently on hold again, at least nothing has been read in the press for a long time.

Extensive oil deposits are also suspected off the coast, but so far no real minable deposits have been proven despite several test drillings by various companies. On the other hand, offshore phosphate deposits are definitely proven. The exploitation of the phosphate deposits on the seabed by the company Namibia Marine Phosphate was applied for years ago, but an initial mining permit, initially for three years, which was granted against considerable resistance in the country, was repeatedly delayed and has since been withdrawn. At the moment the conflict between the company Namibia Marine Phosphate on the one hand and the fishing industry and environmentalists on the other is entering a new round.

From an environmental point of view and also from a sustainability perspective, it seems questionable whether the exploitation of offshore oil and / or phosphate deposits would really benefit Namibia in the long term. According to politicsezine, as a result of the associated environmental risks, there would be considerable risks for two other more sustainable and for Namibia much more important economic sectors, namely fishing and tourism, which is economically important for the coastal region.

A relatively new and potentially promising development due to growing demand is the inland lithium mining near Karibib. A first shipment of 30,000 tons of lithium concentrate was shipped to China in April 2018. The construction of a lithium carbonate processing plant in Walvis Bay is already planned according to the company Desert Lion Energy. For the future, the company plans to expand exports to 280,000 tons of lithium carbonate concentrate per year. However you turn it around: All these projects in the field of mineral resources have one thing in common, they are not sustainable, because sooner or later the supplies will be exhausted.

Perhaps Namibia’s greatest opportunity in the primary sector – the production and use of renewable energy – was unfortunately completely overslept until a few years ago. While rainy Germany with just 1,550 hours of sunshine per year was literally ‘paved’ with photovoltaic systems, until recently there was little to be seen of the systematic use of solar and wind energy in Namibia, and also of the use of energy from biomaterials Little did so, although the country offers ideal conditions for all three options. According to newspaper reports, the Namibian electricity monopoly NamPower still has to import around 60 – 65% of the country’s electricity needswhat has cost Namibia (and will cost) billions of Nam dollars in the past few years.

It is only in the last few years that the political decision-makers and NamPower seem to be gradually rethinking and are finally doing what they should have done 15 years ago, namely to use Namibia’s enormous potential for alternative energies more consistently. A number of smaller solar power plants have been built since 2015 or are currently under construction:

However, all of these projects are still relatively small plants that still only cover a small part of the growing Namibian electricity demand. In the meantime, however, there are concrete plans and some implemented projects for significantly larger solar and wind power plants with capacities of up to 300 MW per plant, including a wind farm near Lüderitz with 40 MW (Lüderitz Wind Power Plant).

If one were to consistently use Namibia’s extremely favorable natural conditions, the country could initially cover its own electricity needs completely from its own production without any problems and even export electricity to neighboring countries (especially South Africa). Renewable energies may even offer opportunities to participate in the hydrogen boom that is just beginning. 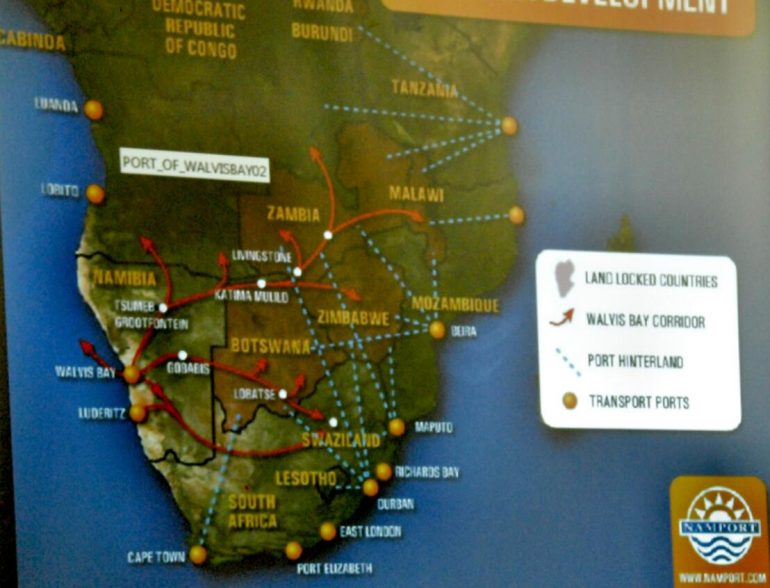