The mining industry, with its two main pillars diamond and uranium mining, still forms the backbone of Namibian exports with a share of around 50%. Because of the high level of technology, it offers relatively few, but well-paid jobs (around 7,000 – 8,000).

Now that the onshore diamond deposits have been largely exploited, diamond production has been predominantly ‘offshore’ for years. In offshore production, the diamond-bearing sediments of the Oranje in front of the mouth of the river at Oranjemund and along the coastal strip to the north of it are filtered off with mud dredgers from the seabed.

By far the most important company in diamond mining is NamDeb, a consortium in which the Namibian government and the South African De Beers group each hold 50% shares. NamDeb’s last two onshore mines are now likely to be closed. Offshore production will continue for a number of years, but offshore reserves will also run out at some point in the next few decades.

With the opening of Oranjemund, the center of the Namibian diamond industry, to the general public and thus also to tourism a few years ago, the government and NamDeb are gradually preparing the region for the time after diamond mining. Oranjemund was until recently a ‘Closed City’ under the full control of NamDeb. Not at NamDeb employees (or other companies involved in diamond mining), access to the city was only possible with a special ‘Security Clearance’. Although Oranjemund was formally granted city status back in 2011, the city wasn’t really opened to the public until October 2017. With this, Oranjemund has now (at least formally) finally become a normal Namibian city, which anyone can visit without further permission and in which every Namibian can now live and work.

According to militarynous, Uranium mining in Namibia has been synonymous with the name of the Rössing company for a long time. The huge Rössing opencast mine near Arandis, which has been producing uranium since 1976, is the oldest still producing uranium mine in the world and for a long time was also the world’s largest uranium mine. It was originally assumed that the uranium deposits in the Rössing mine would be depleted in 2015, but the mine is still producing. The mine is now expected to close from around 2025.

A second uranium mine was added in 2006/2007 with the Langer Heinrich mine of the also Australian Paladine Energy group and then in 2011/12 a third with the Trekkopje mine of the French mining group Areva (renamed and restructured to “Orano” since January 2018). Due to the currently far too low world market price for uranium, the Trekkopje Mine was switched to Care & Maintenance mode immediately after completion in May 2013, in the hope that the world market price for uranium would eventually reach an economically profitable level. The uranium price required for this is at least $ US 70 / pound uranium oxide. In recent years, however, the price has generally been well below US $ 30.

At the end of April 2018, Paladin Energy Ltd. announced that the Langer Heinrich mine will also cease production, as cost-covering production is no longer possible at current world market prices for uranium. The planned closure meant that around 600 jobs were lost. According to Paladin Energy, only a maintenance team of around 20 people will remain on site.

The huge Husab mine, 90% of which is Chinese -owned, has been in operation since 2016. On December 30, 2016, Husab produced the first barrel of uranium oxide. The Husab mine is one of the three largest uranium mines in the world when it reached full production capacity in August 2018. In contrast to the other unran mines, the Chinese main owners of the Husab mine do not seem to be bothered by the low world market price. For the Chinese, the Husab mine is less a private-sector commercial project than a state-strategic investment that is intended to help secure China’s rapidly increasing uranium needs in the long term.

As a result of the currently low uranium price, the importance of uranium mining for Namibian exports and its share of Namibia’s GDP has decreased significantly in recent years. While the share of uranium production in the value added in the mining sector was just under 40% in 2009 (and was thus even higher than the share of diamond production for a short time), the corresponding share is currently only around 5 – 6%. Since 2010 at the latest, diamond mining has clearly dominated the mining sector, with a value added that varies between 55% and over 70% depending on the year. The proportion of GDP to which uranium has only contributed a meager 1 – 2% since 2011, but diamond mining – depending on the year – now 6 – 9% has developed accordingly. 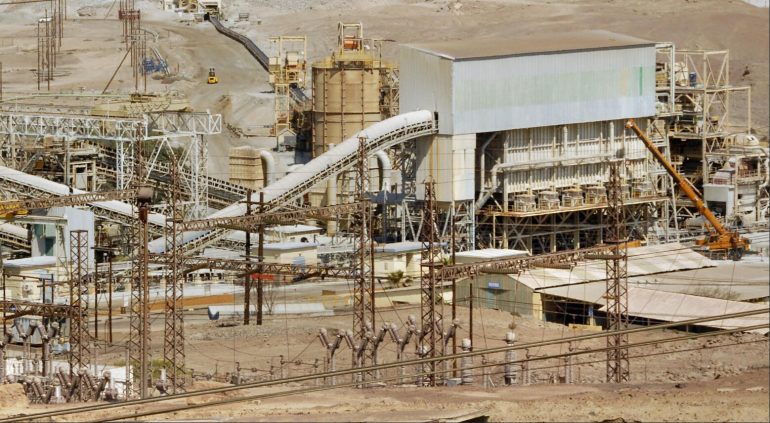 Effects on the Erongo Region

In the Erongo region, Walvis Bay benefits from uranium mining near Swakopmund / Arandis as well as from its function as a ‘cargo hub’ for Namibia as well as for the landlocked countries of Zambia, Zimbabwe and Botswana. Should there ever be offshore gas and / or oil production, Walvis Bay should again benefit particularly from its deep-sea port. The same applies to any exploitation of the offshore phosphate deposits north and south of Walvis Bay. So far, Namibia has not yet been able to come to a final decision for or against phosphate mining. The entire fisheries sector in particular is strictly against the depletion of phosphate deposits, which are feared to have negative effects on fish stocks

Influence of the uranium price

Around 2010/12, the ‘uranium triangle’ between Walvis Bay, Henties Bay and Arandis (see detailed map) was on the verge of an enormous economic boom. In addition to the existing mines Rössing, Langer Heinrich and, since 2016, Husab, various other uranium mines were in the planning stage or were already under construction. According to newspaper reports, the Husab project was the largest mining project in Africa at the time. The spilled briefly in pilot operation Trekkopje mine the (former) French Areva group (after restructuring was “Areva” in “Oran” or “Oran-Les echos” renamed) has also just been completed at that time.

After the Fukushima reactor disaster in Japan in 2011, the world market price for uranium collapsed, which made many of the planned new uranium projects unprofitable at one stroke. Except for the construction of the Husab mine, all other uranium mine projects have therefore been postponed or at least slowed down significantly.

The Trekkopje mine of the French nuclear company Areva was hit worst. Since the construction of the mine was well advanced at the time of the Fukushima reactor disaster in 2011, the mine was initially completed. Because of the collapsed world market price for uranium, the mine had to be closed again in May 2013 immediately after completion and a few days in pilot operation and is also kept in standby mode (‘Care & Maintenance’).

According to press reports, Areva / Orano had invested more than one billion euros in the construction and development of the mine by then. A resumption of operation of the mine is still not in sight. As long as the world market price for uranium does not rise from the current US $ 30 per pound of yellow cake to at least US $ 65 – US $ 80, Trekkopje cannot be operated profitably. Areva / Orano will have to write off this investment as a gigantic bad investment for the time being.

In addition to the mining of uranium and diamonds, numerous other mineral resources are mined in Namibia, including gold, zinc, copper, lead and fluorite. Apart from the zinc production of the Scorpion Mine near Rosh Pinah (which is expected to expire in 2021), the importance of this ‘other mining’ in Namibia is relatively minor, at least if you take the value added and the number of jobs as a yardstick