The political dominance of SWAPO, which has now lasted for three decades, has undoubtedly led to an encrustation of the political power apparatus and to a certain arrogance and self-service mentality, as the reports appearing almost daily in the press show. In particular, semi-public institutions such as Air Namibia (for years repeatedly on the verge of bankruptcy), the Namibian broadcasting company NBC (also practically insolvent), the railway company TransNamib (years of quarrels in top management) or the state pension insurance GIPF, but also certain ministries repeatedly come under public criticism, partly because of obvious corruption, but above all because of inefficiency and waste of tax revenue. However, as even leading opposition politicians openly admit in interviews, the parliamentary opposition is too weak and too divided to translate these grievances into a higher percentage of votes in elections. This is unlikely to change significantly in the next parliamentary elections in November 2019.

Despite these corruption cases, which are always discussed in detail in the press and regardless of persons and offices, Namibia is overall better off in an international comparison than one would expect. Transparency International rated Namibia in the Corruption Perception Index 2019 with 52 out of 100 possible points, this corresponds to position 56 out of 180 rated countries. This is clearly worse than Botswana (61 out of 100, 34th place), but significantly better than South Africa (44 out of 100, 70th place) or Zambia (34 out of 100, 113th place), not to mention Angola (26th out of 10th place), Rank 146) and Zimbabwe (24/100, rank 158). It is interesting that some western and southern European countries are only marginally better than Namibia in the TI ranking 2019 (e.g. Malta with 54 out of 100 and rank 50 or Italy with 53 out of 100 and rank 51) or even worse (e.g. Greece with 48 out of 100, rank 60).

In Namibia’s CPI value for 2019, the so-called Fishrod scandal, which became known to the public in November 2019, is unlikely to be taken into account (for more information, see chapter “Current developments”). This mega-corruption scandal, in which high-ranking members of the government are also significantly involved, is likely to worsen Namibia’s CPI value for 2020 considerably.

According to ezinereligion, the relatively good CPI rating – at least in an African comparison – is certainly also due to the introduction of the Anti-Corruption Commission (ACC), an institution that only exists in this form in a few other countries. Every citizen can report suspected corruption directly to the ACC. The ACC is then obliged to follow up on these indications and to check the reported suspicions. The results of the ACC’s work are regularly documented in an ACC activity report and made public.

It should be noted critically that the ACC takes on suspected cases of corruption and misuse of funds at the middle level, for example in the case of suspected irregularities in medium-sized and large tenders, but is politically too weak to deal equally with intransparent and strange processes at the highest level intervene. Examples of this are the common practice of ‘free hand’ issuing of exploration and fishing licenses to politicians or their family members or business people with corresponding ‘connections’.

The licenses are then usually not used themselves, if only because many of these license recipients do not have the necessary capital and know-how. Instead, the license is passed on to a foreign company. For this purpose, a joint venture is often set up, in which the Namibian license holder only brings in the license and receives corresponding shares in the company. However, all of the work and value creation is done by the foreign partner.

There are investigations into corruption in Namibia from various institutions, including the World Bank. In this context, it is also interesting how the population themselves assess various Namibian institutions (parliament, president, government officials, police, judges, etc.) with regard to corruption. These assessments of the population – which of course do not necessarily have to be congruent with the actual extent of corruption – are, for example, regularly collected through interviews with the Afrobarometer organization. 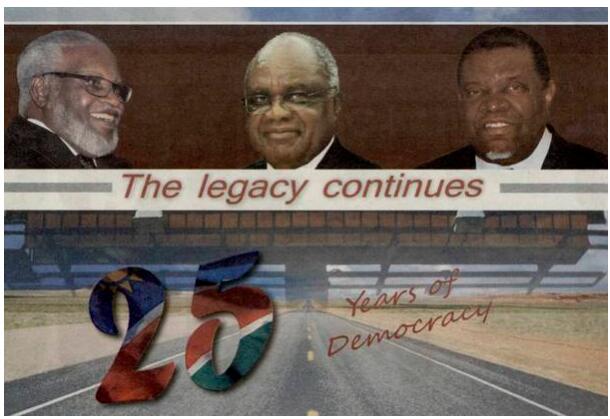