Compared to many other African countries, Namibia’s natural and man-made ecological problems are (still) relatively minor. A structural ecological disadvantage is the mostly low, but above all unreliable precipitation (see also the chapter “Climate”).

The low rainfall is the main natural factor limiting the country’s agricultural potential to extensive livestock farming. Exceptions are only a few regions with higher precipitation, for example in the so-called ‘maize triangle’ between Tsumeb – Otavi – Grootfontein and in the Caprivi. There are also some smaller areas that are suitable for artificial irrigation. These include small areas along the northern and southern border rivers of Namibia and at the Hardap Dam near Mariental. With the construction of the recently completed Neckartaldamm west of Keetmanshoop in the south of the country, additional (limited) irrigation areas will be added in a few years (see overview map at the beginning of the “Economy & Development” subpage).

Despite the actually low rainfall in Namibia, which is generally known as the “driest country south of the Sahara”, the rainy season (from Nov. / Dec. to March / April) repeatedly leads to extremely heavy rainfall, which then occurs in the poor north of the Landes submerge large stretches of land in some years and lead to floods lasting for weeks (see chapter “Climate”). In the Caprivi, in addition to the heavy and seasonally concentrated rainfall, there is also the flooding of the large rivers (especially the Zambezi), as a result of which considerable parts of the Caprivi are regularly flooded for weeks or even months.

According to businesscarriers, ecological problems caused by humans or at least aggravated are the encroachment of large parts of the farmland in north-central Namibia (especially in the area between Okahandja and Otjiwarongo). An annual recurring problem are the bush fires (so-called ‘ veld fires ‘), some of which arise naturally (e.g. due to lightning strikes), but are also used by farmers specifically to improve pasture and to combat encroachment and then sometimes get out of control. In 2011 and 2012, for example, large areas in the Etosha National Park were completely burned down by Veld Fires.

Especially in the communal areas north of the veterinary fence, land degradation occurs in some areas as a result of overgrazing and subsequent erosion, although these phenomena are (still) relatively minor compared to countries such as Lesotho, Eswatini, Ethiopia, but also many Sahel countries are. Due to the dry climate, Namibia only has relatively small areas of forest, these are exclusively in the areas with more precipitation in the north and northeast of the country. Compared to other tropical countries, illegal deforestation plays a (still) relatively minor role in Namibia. Unlike in the Sahel zone, for example, the supply of firewood in Namibia is not a problem. There is far more bush than is needed for it. It looks a little different with logs and construction timber.

The logging, which is partly legal, partly illegal and takes place mainly in Kavango East, Kavango West and Zambezi, is apparently mainly backed by Chinese people, although the process seems to be accelerating at the moment. According to press releasesIn the first two months of 2019 alone, no less than 208 truckloads of wood were exported (only 22 in 2015 as a whole). Some hundred-year-old trees are said to have been cut down. It appears that exports to China (including strictly protected rosewood trees) via the port of Walvis Bay are not adequately controlled. The Ministry of Agriculture, Water and Forestry, as the supervisory authority, is therefore increasingly subject to public criticism, but either does not comment at all or only vaguely on the allegations.

Namibia’s great potential for alternative energies (especially solar and wind power) is unfortunately only being used rudimentary, but seems to be gaining acceptance in recent years, with the majority of activities coming from the private sector.

In the coastal area, especially on the west coast around Swakopmund, Walvis Bay and further north to Henties Bay and Cape Cross, the increasing tourism leads to an increasing burden on the extremely sensitive desert ecotopes, especially along the beach and the north-south coast road. The Namibian Coast Conservation and Management (NACOMA) project tries to protect the coast through appropriate management measures.

Further, not to be underestimated ecological risks arise from the already existing uranium mines Rössing and Langer Heinrich (recently also Trekkopje), but above all from the massive expansion of the uranium mine through several other uranium mines. A comprehensive Strategic Environmental Impact Assessment Report provides details on the measures and possible effects.

The planned mining of offshore phosphate deposits also harbors considerable potential ecological risks, not only for the coastal region and its residents, but also for fishing and the sensitive marine ecology off the Namibian coast. A phosphate mining moratorium imposed in 2013 expired in March 2015. While the Ministry for Mines and Energy is in favor of mining, the Ministry of Fisheries is trying to prevent mining, as it fears negative effects on coastal waters and thus on fish stocks. A Norwegian company is currently working on a comprehensive study on the dangers and risks of phosphate depletion. One of the main problems seems to be that there are plans to use a new phosphate degradation process that has not been tested anywhere in the world before.

In October 2016, the dispute between the ministries escalated. According to reports, the Environment Commissioner of the Ministry of Environment and Tourism issued a so-called Environmental Clearance Certificate from the company Namibia Marine Phosphate (NMP) without consulting the Ministry of Fisheries and contrary to significant concerns of environmental protection experts, which is initially valid for three years. There was a scandal in parliament. The Ministry of Fisheries and various opposition parties consider the issuing of the clearance certificate to be illegal. In the meantime, President Hage Geingob has stepped in and made the matter a top priority.

In 2019, the matter is still pending and a mining permit seems increasingly unlikely, despite considerable pressure from potential investors (including a very rich Omani businessman).

Considerable additional ecological risks could arise in the near future from the exploitation of offshore oil deposits surrendered off the Namibian coast. Although test wells have now shown oil there, no deposits appear to have been discovered so far that have a volume that would make commercial mining economically viable. Should such ‘worthwhile’ deposits be discovered in the future, the ‘uranium triangle’ between Walvis Bay / Swakopmund, Henties Bay and Arandis would be particularly affected by the (direct and indirect) effects, in addition to the coast itself and the coastal areas. Here, too, nothing has changed in the meantime (March 2019). However, should there ever be a large oil discovery off the Namibian coast, this could change suddenly. 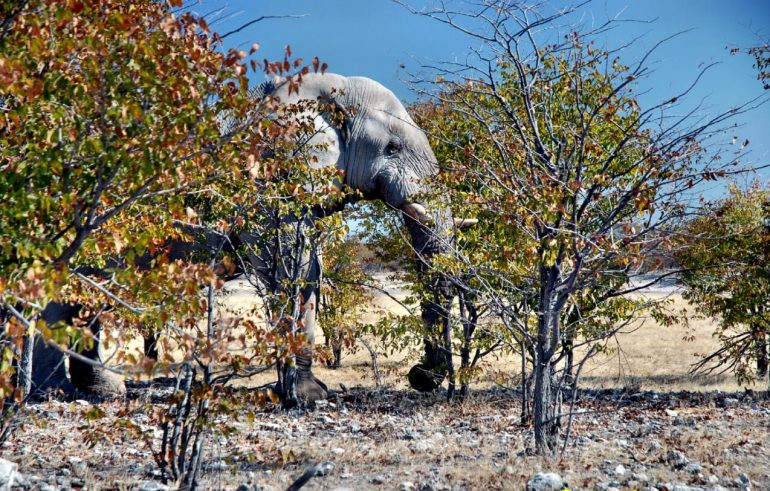