There are numerous studies on the education system in Namibia. Actually everyone who is involved in the Namibian education sector agrees that the education system is a permanent problem area, especially primary and secondary schools. For many years, Namibia has been investing an extremely high proportion of its national budget in the education sector. In 2019 this was N $ 13 billion or 21% of the budget for the financial year 2019. This puts Namibia in the top group for education expenditure worldwide. Nevertheless, the school results are more than unsatisfactory.

As in most other countries, the Namibian school system is divided vertically into primary and secondary levels. A distinction must be made ‘horizontally’ between public schools and private schools. There are considerable differences in quality between the public schools on the one hand and the private schools on the other, mainly because the latter have considerably more funds available due to the currently very high school fees (see also “Everyday life: schools & universities”).

A decisive turning point in a child’s school career is the transition from lower to upper secondary school (grades 10 to 11). Only those who pass the (centrally conducted) final examinations of class 10 are accepted into class 11. Unfortunately, almost half of all grade 10 students regularly fail this hurdle. This leads to considerable protests from parents and students every year, as the failed young people hardly have a second chance at a secondary school diploma, which in turn is a prerequisite for admission is one of the universities in the country.

According to topb2bwebsites, the secondary school system ends with the Namibia Senior Secondary Certificate (NSSC), which every 12th grade graduate receives (regardless of the result). Failure – as with the German Abitur – is therefore not possible. In principle, the NSSC then entitles them to study at a university, but only the approx. 30% best in a year have a realistic chance of a study place. The second big hurdle is the tuition fees of around € 1,200 to € 1,400 per year, which are quite considerable for a Namibian income level, plus the costs for accommodation and living in roughly the same amount.

In the tertiary education sector there are the two ‘flagships’ Namibia University of Science and Technology (NUST) (until the end of 2015 Polytechnic of Namibia (PoN)) and University of Namibia (UNAM). The NUST is considered to be the best tertiary educational institution in Namibia. In terms of its self-image, orientation and range of subjects, it corresponds roughly to a German technical university. The range of subjects is therefore primarily focused on technical and ‘business’ subjects (management, business administration, etc.). The UNAM has a broader range of subjects, including, for example, humanities subjects and, more recently, medicine. The subjects offered by NUST and UNAM are largely complementary, but there are also content-related overlaps.

In addition to these two large state universities in Namibia, there is also a private university with the International University of Management (IUM). With only around 2,000 to 3,000 students and a very limited range of subjects, however, this only plays a subordinate role. In addition, there are various smaller colleges, seminars and similar institutions that mostly specialize in a few training programs. A list of tertiary educational institutions in Wikipedia provides a good overview. The DAAD also provides detailed information on higher education in Namibia.

Many white Namibians, but also many Namibians of the black elite in the country, send their children to study abroad, especially to South Africa, but also to Germany (especially the Namibians of German origin, of course) and the USA. This is partly due to the (still) better quality of education in South Africa, whose best universities are also the best in Africa. In part, it is also due to the fact that certain subjects are not even offered in Namibia (e.g. veterinary medicine, dentistry).

There are different study levels at the universities. The Namibia University of Science and Technology, for example, offered or offers the following degrees:

The Bachelor and Master programs are based on the Anglo-Saxon education system. While Namibia has succeeded in building quite acceptable tertiary educational institutions in the relatively short period of time since independence, the public schools in the primary and secondary education sector are constantly in the crossfire of criticism. Despite considerable investments – education is the largest budget item in the government budget year after year – the quality of school education – at least in public schools – is extremely poor. This is less due to insufficient funding of teaching materials and infrastructure than to poorly trained and often poorly motivated and disciplined teachers.

Numerous ministers have already foundered on these structural problems in the past. The Minister of Education, who died in February 2013, Dr. Abraham Iyambo tried with all his might (and sometimes quite unusual actions) his best to sweep with the ‘iron broom’ and to let a ‘new wind’ blow in the schools as well as in his own ministry. Like Iyambo before, his successors also find it extremely difficult to assert themselves against the sloppiness that has crept in over the years and against the institutional stubbornness in schools and at the ministry. When the new government under Hage Geingob took office in March 2015, the Ministry of Education was split into two ministries, one responsible for primary and secondary education and the other for tertiary education. 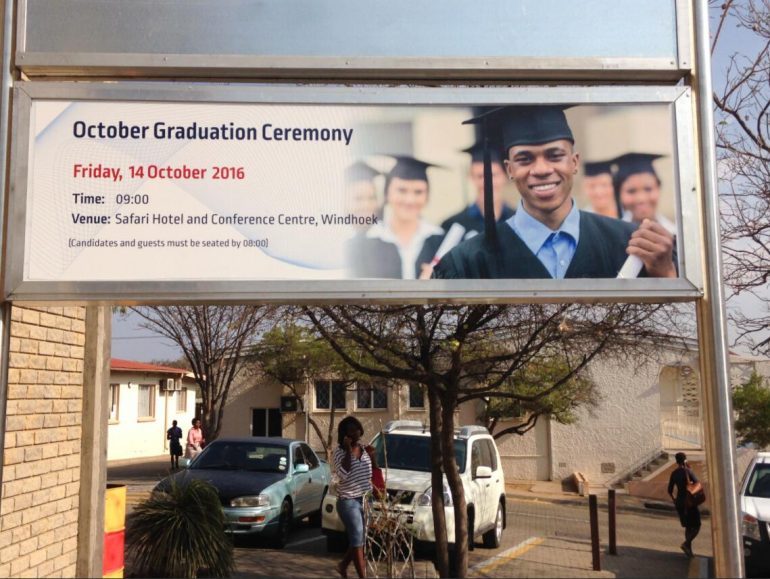