An excellent three-dimensional illustration of various regions and cities in Namibia is shown by numerous 3D block images that were created as part of a student project at the Institute for Geography at JLU Giessen. With the help of the ArcGIS geographical information system, 3D landscape models were calculated from freely available elevation data. The resulting terrain models were then covered with aerial and satellite images from various sources using the ‘image draping’ method. By rotating the 3D landscape models interactively on the screen, spectacular videos were created that can be accessed via the ArcGIS online pages of ESRI Inc. and also via YouTube.

Towards the Atlantic, the highlands descend to the west over a north-south edge, the so-called “Great Escarpment”. This edge step, which is clearly recognizable in the relief map, is very steep and rugged over long stretches (see, for example, the 3D terrain model No. 20 “Spreegthoogte Pass “). In the central part of the country (e.g. along the B2 from Okahandja via Karibib to Swakopmund), on the other hand, the highlands drop continuously and therefore hardly noticeably down to sea level.

To the east, the highlands gradually merge into the 1200 m high Kalahari basin without any drainage, the greater part of which lies in the neighboring country of Botswana to the east. On the Namibian side, the Kalahari consists primarily of north-south running longitudinal dunes of medium height, which increasingly merge to the east into plains with scattered drainage-free depressions.

The Namib Desert stretches along the Atlantic coast for more than 1500 km, also running north-south and on average about 100 km wide. The Namib is considered to be the oldest desert on earth. Their up to 350 m high dunes extend in large parts right up to the Atlantic Ocean. In 2013 the Namib was declared a UNESCO World Heritage Site.

The highest point in Namibia is the Königstein (2602 m), one of the peaks of the Brandberg massif (animation No. 2) in the north-west of the country, approx. 100 km north-northeast of Henties Bay. The north of Namibia is shaped by the approximately 120 x 50 km large Etosha pan. This drainless pan forms the core of the Etosha National Park, which with its abundance of animals forms “the” tourist highlight of Namibia.

This is followed in the north by the so-called “Oshana system”, which is also known as the “Cuvelai system”. This is a system of flat, north-south running depressions that gradually fill with water for days, weeks or even months during the rainy season, depending on the strength of the precipitation in northern Namibia and in the bordering Angola.

Due to the extremely low gradient, the water then only flows away very slowly and in years with high rainfall there are repeated large-scale floods. In 2008, 2009 and 2011, these floods, known in Namibia as ‘Efundja’, caused great damage in the densely populated north of Namibia and largely paralyzed the economy and public life for weeks. Parts of the Zambezi region (formerly Caprivi) in the far north-west of the country are also flooded to a greater or lesser extent almost every year, most recently in 2018.

Due to its desert climate, Namibia has no permanent water-bearing rivers apart from its border rivers in the south (Orange) and north (Kunene, Okavango, Linyanti and Zambezi). The country is criss-crossed by a multitude of dry rivers, which are known as ‘districts’. If such an area flows in the upper reaches (‘comes off’) after heavy rain, the dry river turns into a torrential stream in a few minutes, which then usually only carries water for a few hours or at best a few days.

Most of the dry river systems run in the northern half of Namibiain an east-west direction, i.e. towards the coast. The greater part of these dry rivers reach the Atlantic (Swakop near Swakopmund, Kuiseb near Walvis Bay), others seep into drainage-free depressions (so-called ‘Vleis’) in the Namib Desert. The best example is the Tsauchab, which penetrates into the center of the Namib and then ends in Sossusvlei, which is surely Namibia’s second most visited tourist attraction after Etosha (3D animations No. 4 to 7).

The north-south trending Fish River system covers most of the southern half of Namibia. In the extreme south of the country, the Fish River has cut several hundred meters deep into the rock layers and formed the Fish River Canyon. It applies (see 3D animation No. 21), after the Grand Canyon in the USA, as the second largest canyon on earth.

The country has large amounts of valuable mineral resources, especially uranium and diamonds, but also copper, zinc, tungsten and other minerals. The major uranium deposits are located in the ‘uranium triangle’ on Namibia’s west coast between Walvis Bay in the south, Henties Bay in the north and Arandis in the east. The diamond deposits are located in the south of the country, especially in front of the mouth of the Orange. In addition, there are high stocks of fish and cattle and a well-developed, highly professional tourism industry. (For detailed information on the various economic sectors, see section “Economy and Development”) 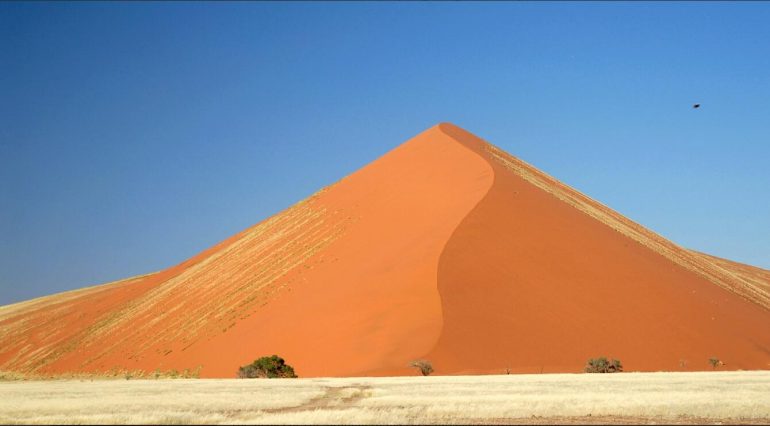