Freedom of the press and expression

For a relatively young country, Namibia has an astonishing and impressive level of freedom of the press and expression. According to the Freedom of Press Index of the organization ‘Reporters Without Borders’, Namibia is again in an impressive 23rd place worldwide (out of 180 countries evaluated) in 2020 (as in the previous year) and thus only twelve places behind Germany (11th place) and even has it in Africa recaptured its first place!

In the press freedom ranking, Namibia is still (partly significantly) ahead of several southern and western European countries such as the small Liechtenstein (24), but also Spain (29), France (34), Great Britain (35) and Italy (41) mention the USA (only rank 45).

According to extrareference, the next African countries are Cape Verde (25) and Ghana (30), behind Namibia. The direct neighbors South Africa and Botswana only follow on ranks 31st and 39th, not to mention Angola (106), Zambia (120) and Zimbabwe (126).

One reason for the astonishingly high level of freedom of the press in Namibia is that SWAPO (at least so far) has such a strong position in the country that it ‘no longer itches’ the sometimes very, very clear criticism in the media! With a three-quarters majority in parliament (repeatedly fully legitimized by democratic elections), the government does not need to fear a critical press, at least at the moment. However, should the dominant position of SWAPO, which has never really been questioned since independence, come into danger in the future, the high degree of tolerance towards the media, the party and the government (which is in fact the same in Namibia) could so far become apparent put, may lose weight very quickly.

As a result of the country’s low population, the media landscape in Namibia is quite manageable and in no way comparable to the media diversity in South Africa. Below is an overview of the most important print media in Namibia:

In addition to the print press, there are of course various TV and radio stations: 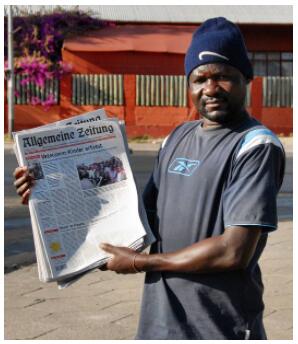 A major flaw in Namibia’s political development is that the parliamentary opposition is practically ineffective (see explanations under “Law and order, state security” above). However, this cannot be blamed on SWAPO; rather, the opposition parties have to be asked why they have not managed to build an alternative to SWAPO that is attractive to voters since independence in 1990.

In the absence of an (effective) parliamentary opposition, the government in Namibia is largely monitored outside of parliament, primarily by the public and especially the press. Outside Parliament, important political questions are also taken up by non-governmental organizations (NGOs) and introduced into a public discourse. A brief overview is given. Particularly important NGOs in Namibia include:

The NGOs in Namibia cover a wide range of social issues with their different focuses. As a rule, you work very professionally and appear extremely self-confident in public discussions. Together with the print media, the NGOs have a considerable influence on public opinion and thus represent a counterweight to the government that should not be underestimated.

The positive development of this NGO landscape and the free press are certainly among Namibia’s most important achievements since independence. A good overview of civil society in Namibia is provided by an annually updated overview of Namibian civil society published by the Namibian Institute for Democracy. The Namibia Non-Governmental Organizations Forum Trust (NANGOF Trust) acts as the umbrella organization for NGOs in Namibia.

In spite of all (justified) criticism of unprocessed chapters of Namibian history during the independence struggle, Namibia has developed into one of the freest countries on earth in the years since independence. The latest country report from Amnesty International (2017/18) provides more information.

Critical points are the completely unacceptable duration of the ‘ Caprivi Trial’, which has only just been completed – now almost two decades after the attempt at separation. The accused, who have now been acquitted after many years of pre-trial detention, are now suing the Namibian government for compensation for the years that they were unjustly spent in pre-trial detention.

In addition to the Caprivi process, the continued lack of internal processing of SWAPO’s own human rights violations when dealing with (suspected) spies / deviants in their own ranks during the liberation struggle is a second dark chapter in the still young Namibian history.

Apart from these two important dark points on Namibia’s otherwise largely ‘clean slate’, international rankings repeatedly confirm that Namibia’s citizens enjoy a very high degree of personal and political freedom. This is an achievement that African countries cannot take for granted and one that Namibian politicians like to refer to again and again.