Due to its past as a former German colony, there are special relationships between Namibia and Germany, which also affect the current cooperation. No other country receives higher grants (per capita) than Namibia within the framework of German development cooperation.

Namibia, the ‘Land of the Brave’ is one of the youngest countries in Africa. With 824,000 square kilometers and around 2.5 million residents (CIA World Factbook, July 2017, estimate based on the 2011 Census), the former Southwest Africa, which became independent in 1990, is the second most sparsely populated country on earth. Breathtaking landscapes and a fascinating animal world make it a popular long-haul travel destination.

In contrast to many other African countries, Namibia’s economy rests on several pillars. Mineral resources (especially diamonds and uranium), fishing and fishery products as well as the rapidly growing tourism industry are the main sources of income. Namibia’s ‘Vision 2030’ plans to significantly expand industrialization.

Until a few years ago, Namibia was the country with the largest income gaps worldwide. More than half of the population lives below the subsistence level. The social contrasts can be seen in the growth of the squatter settlements on the outskirts of the cities and increasing crime. Despite the problems, the ruling SWAPO was confirmed in office with 80% in 2014.

According to a2zgov, Namibia is one of the most beautiful and scenic countries on earth. Friendly people, the excellent climate, an excellent supply situation and a wide range of leisure activities make it one of the countries with the highest quality of life in all of Africa, provided you have the appropriate income.

Namibia, which was called “Southwest Africa” until its independence in 1990, is bordered in the north by Angola, in the extreme northeast by Zambia, in the east by Botswana and in the south and southeast by the Republic of South Africa. The Atlantic Ocean forms the western border. With 824,292 square kilometers, Namibia is 2.3 times the size of the Federal Republic of Germany (357,022 square kilometers).

Current basic data on Namibia are provided by numerous websites, for example:

The Wikipedia pages on Namibia and the Namibia information on the Munzinger country pages are also very informative. The most extensive time series data can be downloaded from the International Development Indicators on the World Bank website. Data on social development (special Human Development Index) are provided by the corresponding Namibia pages of the UNDP. The country rankings of the Mo Ibrahim Foundation are also very interesting, especially for a ‘performance comparison’ with Namibia’s neighboring countries and Africa as a whole. Here you can also view excellently prepared compact comparative data for selected regions, e.g. for the region of Southern Africa. Selected data packages can be downloaded in various formats for more detailed analysis and further processing.

Namibia is – despite the occasional flooding in the north – the driest country south of the Sahara. The annual mean precipitation ranges from over 600 mm in the extreme northeast (Caprivi Strip) to less than 20 mm on the Atlantic coast. The precipitation decreases from the Caprivi towards the west and south. The capital Windhoek in the central highlands has a long-term mean of around 380 mm.

Apart from the extreme south of the country, precipitation falls almost exclusively in the summer months, especially from December to March. The rain-bringing winds come mainly from the east and northeast. Most of the moisture is already lost on the way west via Mozambique, South Africa and Botswana, so little precipitation remains for Namibia.

The low rainfall is the limiting factor in the agricultural use of the land. Due to the low, unreliable and poorly distributed rainfall over the year, arable farming is risky, not very productive and only possible in the (relatively) rainier areas of the north, especially in the so-called ‘maize triangle’ Tsumeb – Grootfontein – Otavi (see also “Ecological problems”),

The climate on the coast is characterized by the cold Benguela Current, which regularly causes coastal fog all year round, creating a typical fog desert. The cold air, which comes mainly from the sea, is quickly heated over land and thereby reduces the relative humidity. Despite the frequent fog in the immediate vicinity of the coast, precipitation is almost completely prevented, so that the west coast of Namibia is one of the driest areas in the world.

Nevertheless, extreme precipitation can occasionally occur on the coast or a little further inland in certain weather constellations. For example, in 2006 in Lüderitz on a weekend in March, as much rain fell as in the previous five years. In 2008, after heavy rain in an otherwise hyperarid region, the open pit of the uranium mine Langer Heinrich (approx. 70 km west of Swakopmund) was completely flooded and in 2006 as well as 2007, 2008, 2009 and 2010 it occurred in northern Namibia as a result of unusually high and prolonged periods Rainfalls lead to significant flooding in the very flat terrain. At times, the Namibian government even declared parts of northern Namibia to be an emergency area. 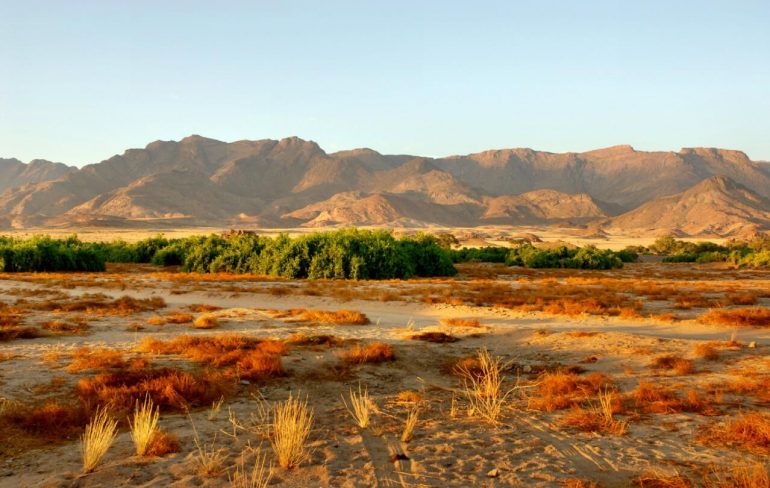