Namibia sees itself – just like South Africa – as a rainbow nation, whereby the term ‘rainbow’ stands as a metaphor for the different skin colors and ethnicities that make Namibia a nation. The slogan ‘Unity in Diversity and Diversity in Unity’ is, like the slogan ‘One Namibia, one Nation’, an important principle of the Namibian self-image as a country, nation and state.

According to thereligionfaqs, the ethnic diversity of Namibia was also taken up in the logo, which was specially created for the 20th anniversary of Namibia’s independence on March 21, 2010. The logo shows people in different colors who cheerfully stretch their arms up. They symbolize the numerous ethnic groups of Namibia: Ovambo, Herero, Nama, Damara, Himba, Kavango, Baster, Tswana, Caprivier, San, mixed race (colored) and white.

The white Namibians, especially the German speakers, play a very important role in the country, especially in the Namibian economy, despite their relatively small number. Namibians of German origin are represented by a disproportionately large number of people, especially in the handicrafts and retail trade, but also in the gastronomy and tourism industry, and this also applies to a significant proportion of the commercially producing farmers.

For newcomers to Namibia, it is not easy to recognize the ethnic group of the person you are talking to, especially if – as is common practice – you are talking to each other in English. However, the names of the interlocutors often allow conclusions to be drawn about the ethnic group. Family names like Angula, Nujoma, Nangolo, Nashidengo or Iyambo almost certainly suggest an Ovambo as a conversation partner, while family names that begin with “Tj” (e.g. Tjingoro, Tjivikua) are typical of Herero. Family names that have a “!” contain, refer to Nama, Damara or San. The “!” stands for one of the clicks that are characteristic of the Nama and Damara languages, but above all of the San dialects.

Over time, you develop a pretty good feeling for being able to reliably infer your ethnic affiliation from your name, language and appearance. Numerous travel portals provide further information on Namibia’s ethnic diversity.

To claim that ethnicity no longer plays a role in Namibia would not do justice to reality. It seems, however, that in Namibia – at least in comparison to some other African countries – the national identity and the feeling of being primarily ‘Namibian’ and only then belonging to a certain ethnic group is comparatively strong. The long common struggle of the various ethnic groups for independence has certainly contributed to this, as has the decision to make English the sole state language of Namibia in the constitution.

Especially among the younger, well-educated Namibians, it no longer seems to play a major role who belongs to which ethnic group. Young people with a good education in particular see themselves primarily as Namibians. 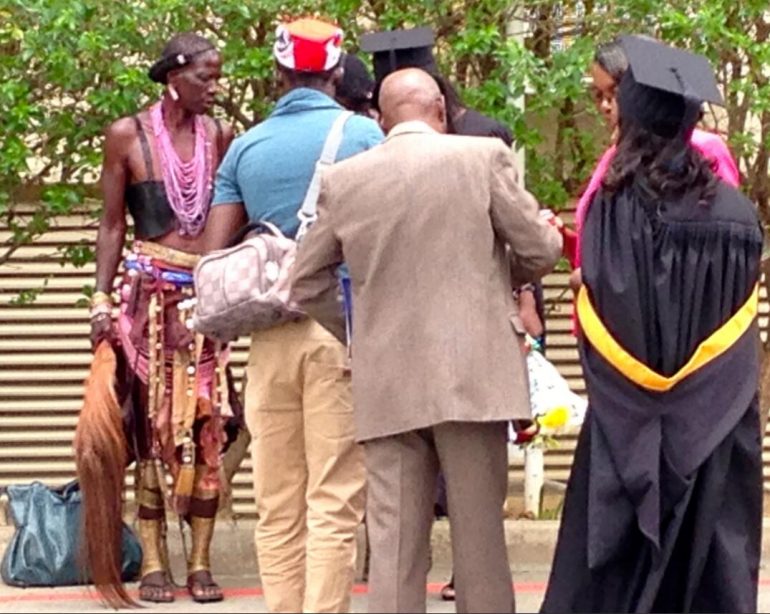 Despite the effects of the HIV / AIDS pandemic, Namibia still has the typical pyramidal age structure of a developing country: a broad base with many children and young people, and a rapidly tapering peak with only a few old people over 60 years of age. According to the 2018 CIA World Factbook, around 37% of the population are under 15, around 20% between 15 and 24, 35% between 25 and 54, and only 4% each between 55 and 64 and 65 and over.

Given the relatively low proportion of people over the age of 60, Namibia can afford something that only few other countries in Africa can afford: a state-financed and guaranteed pension. Under the National Pensions Act of 1992, the state pays all citizens over 60 an (albeit small) state monthly pension (Old Age Pension). This was initially NAD 550 / month, before it was increased in 2013 to initially NAD 600 and then in April 2015 by the new President Hage Geingob to initially NAD 1000 and recently (end of 2018) then to N $ 1100. This currently corresponds to around EUR 68 (December 2018, EUR / NAD exchange rate of 1: 16), which is certainly not much from a German point of view, but on the other hand means significantly more.