in Namibia, driven in particular by the rural exodus from the relatively populous tribal areas of the Owambo in northern Namibia (see below).

All other places in Namibia than those mentioned above still have fewer than 30,000 residents. Apart from Windhoek and the coastal region around Walvis Bay / Swakopmund, the population of Namibia is mainly concentrated in the so-called ‘Four-O-Regions’ Omusati, Oshana, Ohangwena, Oshikoto in the north of the country.

According to cheeroutdoor, the last census from 2011 shows that Namibia’s population has only grown by around 1.4% per year over the past 10 years, an extremely low value by African standards. The relatively low population growth is primarily due to the effects of HIV / AIDS (infection rate approx. 15 – 16% of the population), which has had a significant impact on the mortality rate and thus also on average life expectancy with a delay since the late 1990’s.

Since independence in 1990 and the associated possibility of being able to move and settle freely throughout the country, there has been an increasing rural exodus and, as a result, the formation of so-called informal settlements on the outskirts of the cities. These are unplanned and usually unauthorized, but often tolerated, squatter settlements on urban land, sometimes completely without, sometimes with rudimentary settlement infrastructure such as roads, water, sewage, garbage disposal, etc.

In other countries comparable settlements are called ‘slums’ (India, Philippines) or ‘favelas’ (South America). Those who live on the fringes of society live here, almost exclusively black Namibians. Most of them are unemployed or have very low incomes, often from the informal sector.

In Namibia, a distinction is made between the so-called ‘formal’ residential areas (‘formal settlements’, planned and provided with ‘normal’ infrastructure) and these ‘informal’ settlements. However, there are now numerous transition stages between the two categories. The longer an informal settlement already exists, the more it was usually (subsequently) connected to the urban supply infrastructure (see also “Everyday & Practical Information”, section “Housing and Supply”).

According to the latest figures, almost a million (almost half) of the approximately 2.3 million Namibians now live in around 230,000 huts (mostly made of corrugated iron) in a total of 308 informal settlements. In Windhoek, the so-called ‘Informal Settlements’ adjoin the former townships to the north and west. The population share of the informal city districts in the total population of a city ranges from almost zero (e.g. Oranjemund) to over 60% in some cities in northern Namibia. In Windhoek it is likely to be around a third of the total population of around 400,000 (own estimate).

The residents of the Informal Settlements are mostly immigrants from the north of the country who, after independence, used the new freedom of settlement to leave their home region in the hope of finding work and a better life in the capital, Windhoek. This rural exodus and the resulting squatter settlements, which have now emerged on the periphery of almost all larger towns, are an increasingly urgent problem. In Windhoek alone, well over 100,000 people are already living in these ‘informal settlements’ under inhumane conditions. Windhoek’s Informal Settlements are growing at around 8% per year, about twice as fast as the city as a whole. 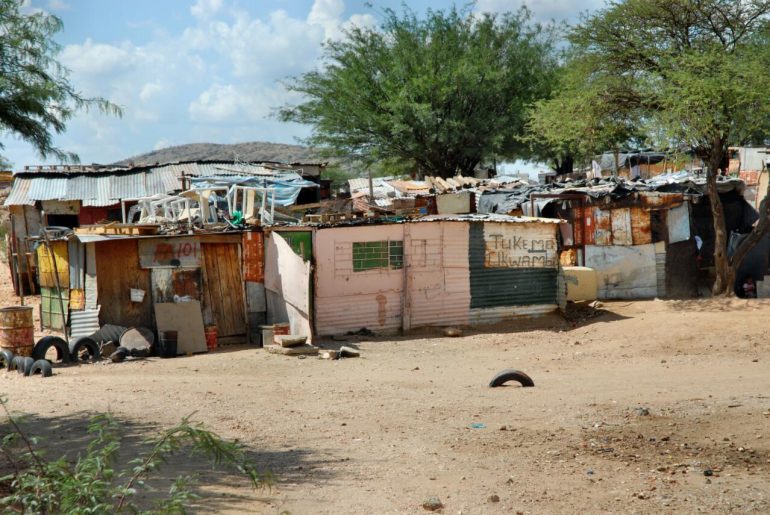 Spatial distribution of the informal settlements in Namibia

The country has a well-developed and well-maintained road network for its size and low population density. The railway network (see also the economic geographic map of Namibia in the “Economy and Development” section) consists of only a few main lines that connect the capital Windhoek with South Africa and the north of the country, as well as with the main port, Walvis Bay and the two coastal cities of Swakopmund and Lüderitz. Walvis Bay has been systematically developed into a ‘Logistic Hub’ for southern Africa for years (see also page “Economy & Development: Economic Development Potential”).

The construction of a new railway line that can bring the Mmamabula coal deposits in eastern Botswana via Gobabis to Walvis Bay has been discussed for many years. The so-called Trans-Kalahari Railway Project took on more concrete forms for the first time through an agreement concluded between Botswana and Namibia in 2014. In 2015, a coordination office was set up in Windhoek to control project planning and the subsequent construction phase. Then you haven’t heard or read anything about the project for a few years. It was not until January 2019 that a Memorandum of Understanding was finally signed between the Botswana Railway and its Namibian counterpart TransNamib and a project coordinator was then appointed in August 2020. Overall, however, the project is already years behind the original schedule and whether such a complex and expensive project can still be realized in view of the declining demand for coal and the additional government spending due to the corona pandemic remains to be seen in the future.