Since 2014/2015 there has been another initiative to get rid of the ‘problem’ once and for all. Both the German and Namibian sides have each appointed a special ‘special representative’ who has since sounded out – largely confidentially and behind closed doors – the scope for action of both sides and the interests of the various parties involved. On the Namibian side, this is Dr. Zedakia Ngavirue, the German special envoy is Ruprecht Polenz. If one believes the relatively few public statements made by the German Special Representative, then the German side’s negotiating strategy obviously boils down to ” to pay in kind”, ie instead of purely monetary ‘reparation payments’

Herero and Nama derive claims to extensive reparations payments from the genocide at the beginning of the last century. So far, this sensitive issue has been held to be ‘low profile’ by (official) German as well as (official) Namibian sides, not least with regard to the possible effects of this negotiation process on the presidential and parliamentary elections at the end of November 2019 After elections have now taken place, both sides will have to show their colors in 2020 as to which solutions and compensation payments have been agreed on at the official level.

Among other things, for some time now – especially since the land conference of 2018 – the demand to return the so-called ‘Ancestral Land’ to the population groups who lost it at the time has been at stake. Some representatives of the Herero and Nama (e.g. Ida Hoffmann) are therefore calling for the issue of land reform to be linked directly to the demands of the Herero and Nama for so-called ‘reparation payments’ for the consequences of the genocide.

According to homosociety, the demand to discuss ancestral land claims would ultimately amount to at least partially replacing the current practice of land reform with so-called ‘restitution’, i.e. trying to return the land to the descendants of the former owners. After more than a hundred years, however, this approach is extremely difficult, if not impossible, for a variety of reasons (in particular the lack of relevant precise documentation) and was therefore deliberately not pursued at the first land conference in 1991 for precisely these reasons.

An interesting marginal aspect of this whole discussion is the different ways in which the Herero war problem is dealt with in Germany and Namibia. Namibia seemed – at least until about 2009/10 – to be much more relaxed about its colonial past than Germany. While, for example, after Mrs. Wieczorek-Zeul’s visit to Namibia in 2014, a von-Trotha-Str. quickly in Herero-Str. was renamed, there is still a street in Klein-Windhoek – albeit a very small one – named after von Trotha, without anyone in Namibia having seemed to mind.

Dealing with the ‘German Heritage’

In recent years the tone of public discussion has intensified and has also led to some symbolic acts. For example, the implementation of the cavalry and Schutztruppe memorial caused considerable irritation on the German side. In 2010, the equestrian memorial was initially relocated around 150 m to a new (not at all bad) location in front of the ‘Alte Feste’ due to the construction of the new independence museum. On the night of December 25th to 26th, 2013, however, the equestrian monument was suddenly in an unannounced ‘night and fog action’ dismantled from this new location in front of the old fortress and moved to the inner courtyard of the fortifications. This action was seen as an open provocation by large parts of Namibia’s population of German descent (but also by many people interested in Namibia in Germany), mainly because of the way it was carried out. For several weeks there seemed to be hardly any other topic on the Allgemeine Zeitung’s letters to the editor.

The Namibians of German origin are also irritated by the increasing renaming of streets, towns and even an entire region since 2013. The Caprivi region was renamed “Zambezi” and various localities with German names (Schuckmannsburg, Steinhausen) are said to have local names. The attempt to rename Lüderitz to “! Nami = Nüs” triggered particular unrest and considerable resistance. (The two characters in the proposed new name stand for click sounds from the Nama language).

It is interesting that the resistance in the Lüderitz case comes not only from the Namibians of German descent, but is borne jointly by a considerable part of the black and white “bays” (as the Lüderitzers call themselves). In addition to fundamental reservations about the renaming, purely pragmatic considerations also play an important role, such as the costs resulting from the renaming and possible negative effects on tourism.

The renaming of streets (specifically in Windhoek) continued in 2018 and 2019. For example, the well-known ” Ausspannplatz “, a central square and traffic junction in Windhoek, was recently renamed “Dr. António Agostinho Neto Square” and the approximately 100 m long ” Storchstraße ” was renamed “Jackson Kaujeua Street” and the well-known “Lazarettstraße” should get the really very cumbersome and extremely long name “President Mwalimu Julius Kambarage Nyerere Street”. 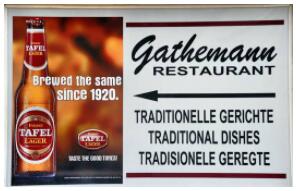